As I played through the tutorial, I noticed a number quite clever features. For instance, the difficulty meter that gives you a sense of challenge before battle, or the locker opening minigame at the end of each battle to collect your rewards, similar to the one used in Seriously’s Best Fiends. But when it came to opening my first gacha pack, I noticed something that stuck out as a clear area for improvement.
END_OF_DOCUMENT_TOKEN_TO_BE_REPLACED

This article originally appeared on Kotaku

Ten hours into Assassin’s Creed Unity, I’m having difficulty finishing up memory sequence 6. That’s just about the middle chapter of the game. I think my character is too weak. His armor isn’t strong enough. Neither are his weapons.

I could stop working on this memory, instead grinding on side missions and locating chests until I have enough Livres to buy more powerful gear. Instead, I open up the eStore and without first looking into what I can buy with Helix credits, opt for the $100 package, the biggest in-game purchase available from Ubisoft, a publisher that would presumably love for me to buy it. 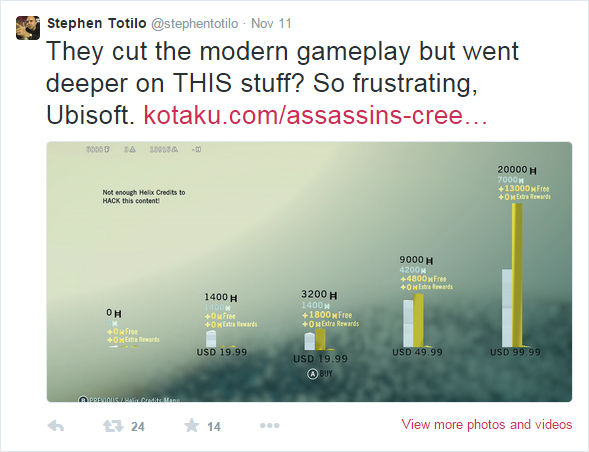 END_OF_DOCUMENT_TOKEN_TO_BE_REPLACED

Don’t feel like reading? Enjoy this short video analysis instead.

Peggle Blast, a free-to-play entry in the fantastically addictive Peggle series, was featured last week as one of Apple’s Editors’ Choice. It has reached top 25 downloads in the US on both iPhone and iPad and is just as fun, whimsical and addictive as the original game. It also employs one of my most hated free-to-play monetization tactics.

Much of my work as a monetization design consultant comes in the UI/UX. Most free-to-play games are built on a small pool of monetization features and their success or failure is determined by a combination of the game’s inherent fun factor and the presentation to the player. Just like Candy Crush, Farm Heroes or any number of Saga games, Peggle Blast offers the player to buy extra moves instead of giving up when they are about to lose a level. But the presentation of this feature uses a trope I find annoying and disrespectful as a player.
END_OF_DOCUMENT_TOKEN_TO_BE_REPLACED