On the second day of GDC, I presented Escaping the Indie Shame Spiral as part of the Indie Soapbox session at the IGS. I wanted to expand on the information I presented it in the talk and share it beyond those developers who could afford to attend GDC.

When I left EA after a 4 year stint at the company I had two goals. One was to found a start-up and the other to finally build and release some of the art game concepts I had been mentally developing for years. The start-up goal was realized, but after a year and half we shuttered our doors after failing to secure funding via the venture ecosystem or Kickstarter. My indie game aspirations quickly fell by the wayside as opportunities to consult presented themselves. I have been lucky enough to build a business as a monetization design consultant and my initial savings have been largely untouched thanks to freelance work over the past two years. I have contributed to a lot of games and have traveled the world to speak at conferences on the topic of F2P design. Yet the longer I go without filling my dream of completing one of my art games, the more regret I feel. 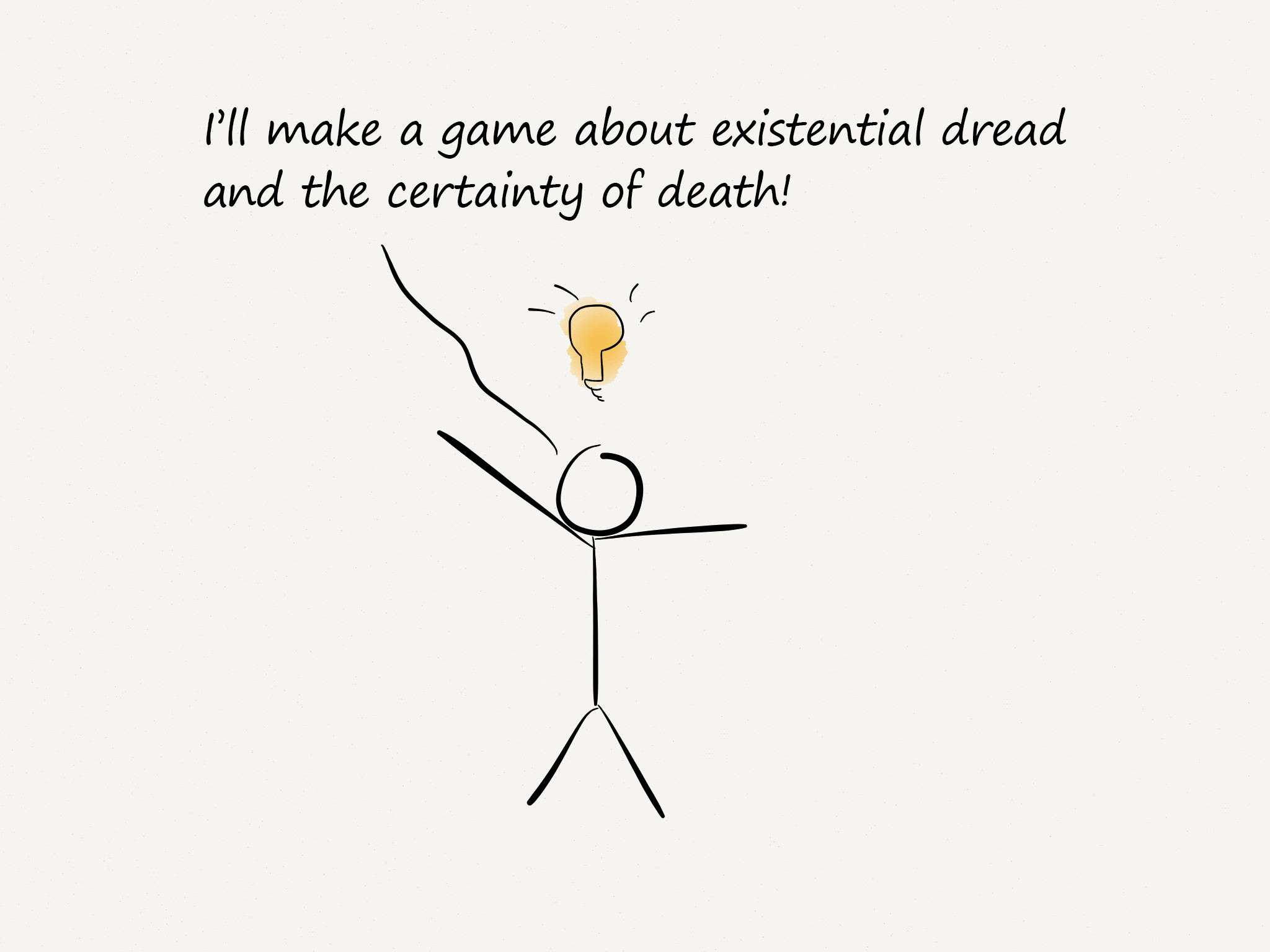 When the start-up failed, I began pouring my time and energy into indie game development. I started working on a game called Some Day You Will Die, a narrative mediation on the inevitability of death. Although initially filled with passion, verve and a deep sense of purpose, I began falling into what I call the indie shame spiral. As I talked to other independent developer friends I learned that my situation was unsurprisingly common among solo game developers. 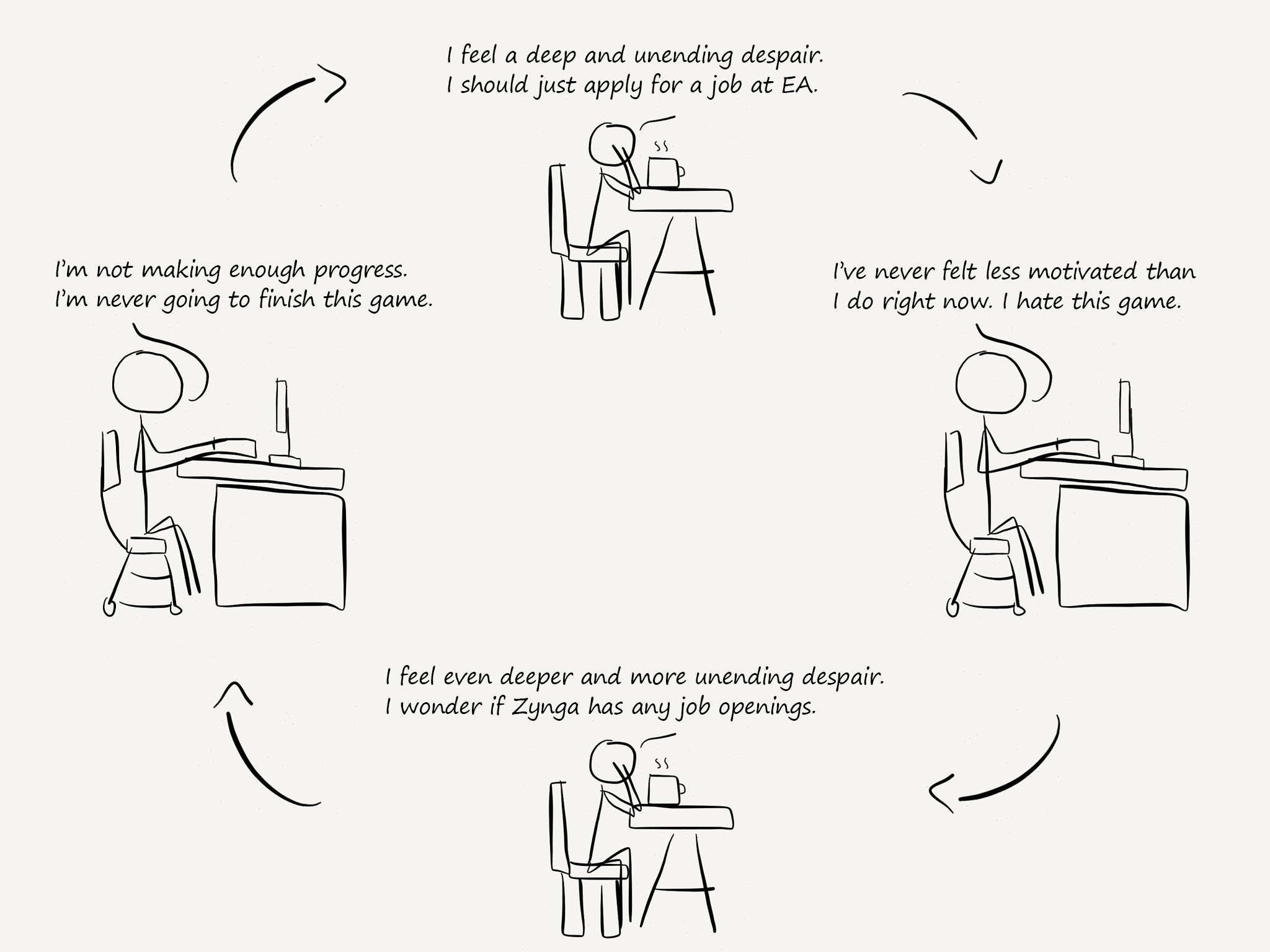 Each Monday I would wake up and excitedly make a list of all the things I wanted to accomplish that day. This included development on Some Day You Will Die, freelance work, work on a match-3 game I was developing with a former colleague and chores like shopping for groceries, running and calling Mom. By the end of the week, I would look at my list and despair. I was lucky if I accomplished half my Monday goals. Not only that, the tasks I did complete after making rent always seemed to be the least critical.

I was getting less and less done and feeling worse and worse about it. I wanted to abandon my game and start prototyping that shiny, new art game concept I felt genuinely excited about. I was trapped in the indie shame spiral.

Thanks to my background as a game producer, I had some tools to help me get my project momentum back on track. The critical first step to escaping the shame spiral was to start running a personal scrum as though I was leading a team back at EA. I fired up Pivotal Tracker and started populating my backlog (alternatively I could have used Trello or a Google Spreadsheet). I like Pivotal because it is an opinionated piece of software; using it forces me to embrace points instead of hours, and the product tracks my momentum and gives me an honest estimate of what I can accomplish in a one week sprint.

Pivotal only allows 1, 2 or 3 point tasks. I decided that a 1 point task was anything I could do with 1-2 hours of concentrated work. 2 points was for 1-2 day tasks and 3 points was for anything that would take half a week (or a lot of effort in short bursts over a long period of time). Any task that would take longer was broken down into component tasks that fit my point system. Chores were critical tasks I had to do that would take 15 minutes or so, such as answering key emails, paying bills or sending and checking up on client invoices. I did not allow my backlog to fill with more than 3 sprints worth of work; backlogs get stale quickly and anything further out was unlikely to stay relevant.

Since I was running a one person scrum, I tracked important personal tasks as well. I created chores for morning meditation and assigned points to incentivize easily skipped personal tasks like running and weekly allergy shots. I used labels to separate personal, freelance and development tasks to ensure I was not artificially boosting my momentum by working on myself while neglecting my games. 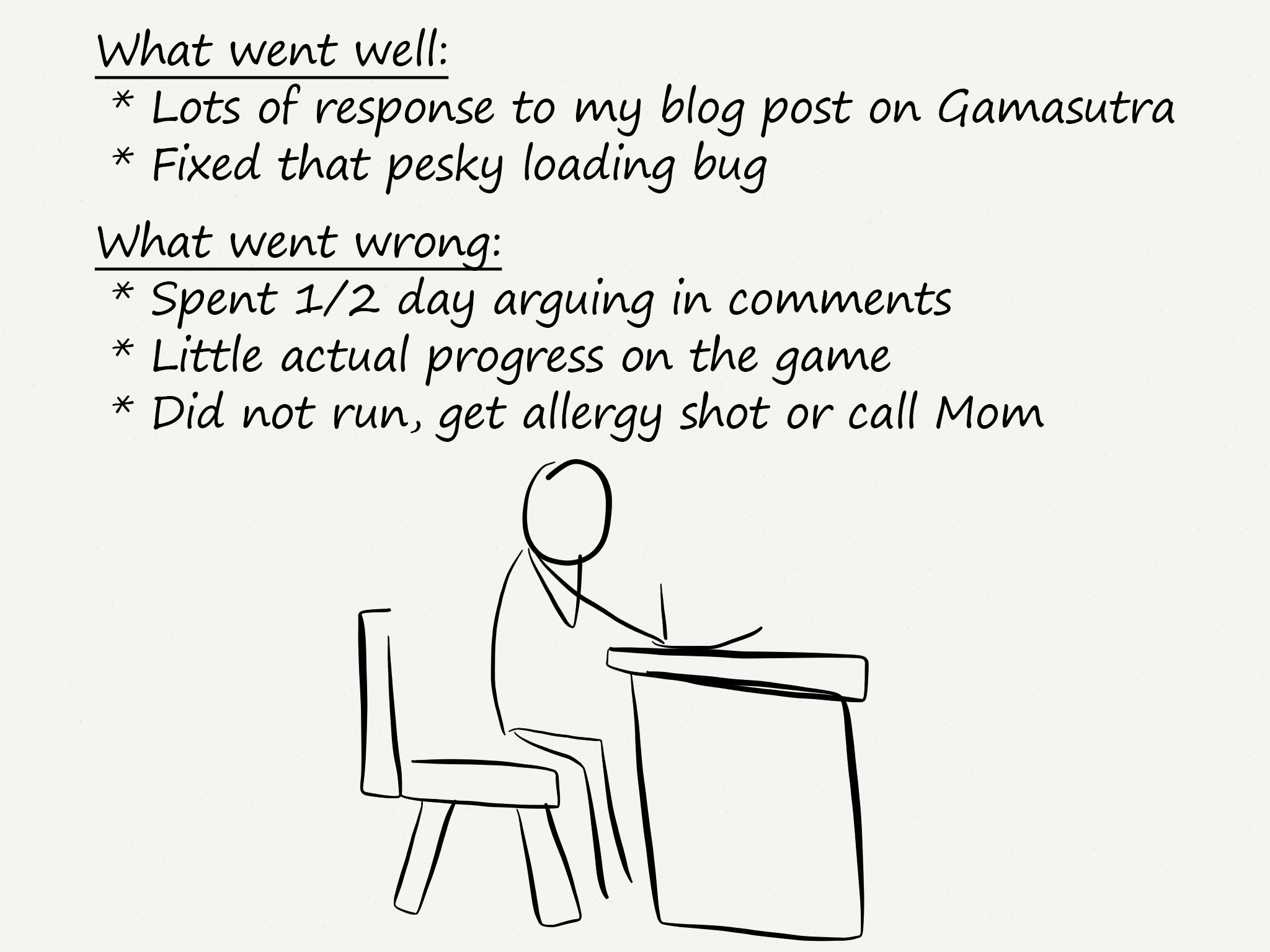 Critical to running successful sprints was ending each sprint with an unflinching post mortem. It is necessary to call out bad behavior, review previous areas for improvement to see if I was in fact getting better and detailing new areas for improvement based on recent failures. After cathartic self-flagellation over my transgressions (and celebration of my accomplishments) I would refresh the backlog, set my new priorities and start a fresh sprint with a clean slate.

I quickly learned how much work I could actually get done in a regular week. Unsurprisingly it was significantly less than my previous Monday morning productivity fantasies. Running personal sprints forced me to accept my limitations. With that acknowledgement the despair began to subside. I was no longer haunted by the demons of unattainable perfection.

The second critical step to clawing my way out of the indie shame spiral was to use a commitment device. A commitment device is “a means with which to lock yourself into a course of action that you might not otherwise choose but that produces a desired result.” For me, this meant buying a table to showcase Some Day You Will Die at the Good Game Club event in San Francisco even thought I did not have a playable build of my game at the time I wrote the check. The event forced me to curb my procrastination and get things done.

By running a scrum and having a clear, hard deadline to show off my game, I started making true progress. I was coding right up to the last minute before the doors opened on the event, but when they did I had a playable demo that allowed me to collect real feedback from real players.

We are lucky to develop in a time where there are plentiful commitment devices available. Submissions to IGF, IndieCade or PAX showcases, Ludum Dare and game jams, local meet ups and demo nights with other developers in your area can all create milestones to drive towards. You can set up a devblog on TIGforums and commit to updating with a demo once a week or set up a newsletter and commit to sending out a playable demo once a month. Every week you have the opportunity to share your game and get feedback from other developers in the r/gamedev Feedback Friday post on Reddit. There are plenty of possible deadlines to commit to either publicly or privately to force yourself to escape the indie shame spiral and make real progress on your game.

When I started the talk, I asked the packed room of game developers how many had 5 or more prototypes, demos, design documents or half-finished games on their hard drives. I was met with a sea of hands. My call to action to the Indie Games Summit, and to you if the concept of the indie shame spiral sounds familiar, is to choose a commitment device and show off your game. I am personally deep in the shame spiral – for weeks I let my process fall by the wayside and have been completely focused on freelancing and a match 3 game. I haven’t opened Game Maker even just to fix bugs in the Some Day You Will Die code for too too long. My pledge at the summit was that on March 28th I will show off my game on r/gamedev’s Feedback Friday. It won’t be pretty and it won’t be complete, it might not even be any good. But it will be playable and I will have to make true progress to get there. I hope to see your game on the thread too, so that I can give you feedback and congratulate you on making progress towards completing your game.

Day 3 was a disaster; completely unproductive, creatively bankrupt and frustrating.  It is an inevitability of creative work.  Despite the setbacks, the day underscored why using the scrum process to write music was a powerful idea. On day 3, I watched tutorials and then left for a doctor appointment and visit to Guitar Center to pick up some audio gear.  I had been making progress with only Ableton and my laptop so far, but I […]

Click the play button to listen to audio of the talk Slides and audio from the Flash Games Summit 2012 panel I moderated with Andrew Sega, Dan Stradwick and Sean McGee.  Inside we discuss the many issues that face Flash games developers in 2012, including funding, distribution, platforms and technology.

The value of bad publicity

Yesterday morning during the Enhanced Wars stand up we realized something fishy was going on. It was 9am on the west coast and already we had 10x the normal amount of email sign-ups for early access to our game. I have been in charge of outreach efforts on Enhanced Wars as we have built up an early audience in preparation for our Kickstarter campaign, and we were already having one of our best days yet. And I […]

So you’re a manager now

You’re good at your job. You’re a leader within your discipline and your job title may or may not say it. You’re one of the more senior members on the team. And one day you are told that you are in charge of other people. These people are probably your friends. You play games with them during lunch and go grab drinks after work on Fridays. Now you’re their boss. Back before I went indie […]