Yesterday morning during the Enhanced Wars stand up we realized something fishy was going on. It was 9am on the west coast and already we had 10x the normal amount of email sign-ups for early access to our game. I have been in charge of outreach efforts on Enhanced Wars as we have built up an early audience in preparation for our Kickstarter campaign, and we were already having one of our best days yet. And I had not done a thing.

Who was talking about Enhanced Wars? I had not put out any new media; I was too busy writing copy, fixing bugs and editing video in the mad dash to go live. I was on the lookout for a preview from a major media outlet after doing an interview almost two weeks earlier, but it was not live yet. Ten minutes of Google searching later and I found it: a hot article on Kotaku analyzing a talk I had given as part of the “Evil Game Design Challenge” at the recent Casual Connect.

The challenge (which I lost to Greg Costikyan) was to pitch a redesign of the venerated classic Super Mario Bros. 3 as a free to play game. The article The Horror: If Super Mario Bros. 3 was made for Smartphones was a fair, but unflattering analysis of my entry. Thankfully there was a prominent mention and link of Enhanced Wars near the top of the article as well as a number of the slides from my talk that had our website listed in the footer.

To help fund Quarter Spiral, I’ve been working as a monetization design consultant for the past year or so. I have been speaking, writing and posting about freemium design for long enough to know that Gamers HATE free to play. I braced myself as I scrolled down to the comments. Would anyone top a recent redditor who called me a cancer on the videogame industry among other insults? As expected, the comments section did not disappoint: 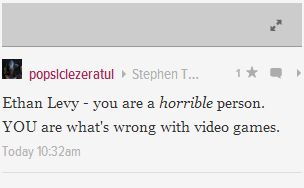 I’m used to being a punching bag at this point and generally find it amusing. Merely by talking about my consulting work I become the embodiment of all things free to play and horrible by people who do not really understand what I do.

So, an unflattering article, lots of hate and personal attacks in the comments but a high value link to our game. What exactly is the effect of getting bad (well, unflattering) press from one of my favorite gaming sites on the internet?

In about a day, the Kotaku article has over 69k visits and 240 comments. The Quarter Spiral website promoting Enhanced Wars received more than 35x its average number of unique visitors on a day where we are not promoting anything. We are a small, indie studio who does not get a lot of daily traffic so even though the influx of users was not huge in an absolute sense, in comparison to our normal day it was monumental.

But unique website visitors are almost meaningless. What really matters is new email addresses. On our website we have two calls to action: sign up for early access to Enhanced Wars and take a survey about turn-based strategy games and tell us what you think. This is where the Kotaku article, despite slight bruising my ego, truly provided value for Enhanced Wars in the run up to our Kickstarter campaign.

So it goes to show, there really is no such thing as bad publicity. Although I am certainly worried about the impact of negative associations between my public persona as a free to play game designer and my role in building Enhanced Wars, yesterday truly was our best day yet for raising awareness. I would not want to repeat the event as I can’t imagine a campaign based on bad publicity working out over the long term. But even my bruised ego can see the value of yesterday’s article.