Recently, I had the pleasure of speaking with game industry veteran Michael Rubinelli, current Chief Gaming Officer at WAX, a blockchain purpose built for the high transaction frequency and volume of blockchain games.

Michael is already seeing massive success with the launch of Blockchain Brawlers on WAX. In this episode, we discussed the importance of using language that gamers understand in the crypto space, mutual lessons from our time in free-to-play, legendary MtG’s creator Richard Garfield’s involvement in Blockchain Brawlers, and why Michael believes that play-to-earn & Web3 will become dominant in the world of gaming. Here are some highlights from our discussion:

Michael Rubinelli: It’s like going into the back of a New Orleans parish trying to learn Cajun for the first time. And it’s just like, “I know I speak English, but I don’t speak this English.” And so yeah, things that are easy to explain are easy to understand. If they’re easy to understand, then people are going to adopt it.

Ethan Levy: The way that you’re describing WAX, it plays very much into what my hypothesis is on the space. All these free-to-play games are digital economies with currencies and assets, and when the technology gets to the point where I can have an equally frictionless experience playing a Web2 free-to-play game and a Web3 free-to-play game, but in a Web3 game if I play AFK Arena for six months and I spend a hundred dollars, and then I’m done I can sell my assets to someone else for $80. Of course I’m gonna play that game where I can resell my stuff instead of the equivalent experience where I don’t.

It sounds to me like WAX Studios has a very similar philosophy underpinning its design, which is to enable people, not only the design of the system, but then at WAX studios, the design of the games that you’re doing… this should just be a normal gaming experience basically.

On lessons from the F2P revolution…

Michael Rubinelli: All these people that were native free-to-play companies, they were the ones who shifted the landscape and forced Tencent, EA, Warner, Brothers Interactive, at that time Midway/Williams, they all forced them to shift their thinking because this is so obviously better, but it took a north star experience to show them that. And they’re like, “Wait a minute. How did this company make $10 billion dollars in revenue?”

So play-to-earn is the exact same way. So the question that we have and our foundational thinking is: we have to find a cause greater than ourselves, that allows us to live a meaningful life because we’re doing meaningful work.

When you outgrow things and you no longer need them, you can still keep playing. And now the bottom of your inventory levels you are putting into a market or you’re giving to a friend of yours. I can do with it whatever I want. I can trade it. I can sell it. I can disassemble it. I can break it down into materials I can sell.

And that is, in creating a player-to-player economy, or a participation economy as we refer to it as, is so unbelievably powerful. And we know that this is the way the world is going. And we at WAX wanna lead that change.

On play-and-earn as opposed to play-to-earn…

Ethan Levy: There are very few people who make their living from League of Legends compared to the number of people who play it for fun. Just because a game has the capacity for people to generate revenue from it, doesn’t mean that the majority of people who are playing it are going to. Like, you have to make a game that’s fun first and that people wanna play. And I feel like I can’t shout at my free-to-play colleagues enough. We know how to make digital economies. That is what we do! Why are you so resistant to these ideas?

Michael Rubinelli: And so we had Richard Garfield in our back pocket, but we couldn’t talk about it. But we said there’s a deep and meaningful PVP game here. And people are like, “I don’t know, it just looks like a mining game.” And I say “Right! We know what you see on the screen today. You have to have this vision. You have to trust us.”

And we’re trying to build this trust by communicating and by showing you who we are, we’re trying to show you how we operate. We have this very long lens kind of perspective.

Ethan Levy: Let me go back to something really quick… Legendary game designer Richard Garfield, creator of Magic: the Gathering and thief of my adolescence… he’s designing Blockchain Brawlers?

On red pilling on Crypto gaming…

Ethan Levy: What I think is really smart and echoes some of the conversations we’re having internally about the game and about the RPG I’m working on, and the go-to-market strategy… My early analysis on the market was that the gamers who are here for crypto games right now, their expectations for interaction and for what a game is are super low relative to what we’re used to, especially if you’ve been working in mobile for the past 5 or 10 years as the ocean’s gotten redder and redder.

If I think about the feature set of the soft launch for Legendary: Game of Heroes, versus the feature set for a soft launch of what I would launch today before putting my first marketing dollar in – the game today would look like three years of development into Legendary.

It’s just a very mature market. And I think that if you took that same mindset, if I started a crypto game today, and I spent three years building it before releasing the soft launch, I’m gonna lose to someone who’s doing what you’re doing, which is launch early, with very little there, launch with something of quality and with a roadmap, and then set your expectations with your audience and hit your expectations over and over and over again.

Michael Rubinelli: I think the first mistake developers make is thinking that this world isn’t about to go to crypto based gaming or NFT based gaming. It absolutely is.

[Reddit Co-Founder] Alex Ohanian said “In five years, there’s not going to be a single interactive gaming experience that comes out that does not have some version of blockchain or Web 3 in it.” And he’s 100% correct.

The biggest, smartest people in the world think this and they see it and everybody else should embrace that thinking. Don’t try to defend a business model that’s outdated. You need to have the courage to take the risk to go into this world and you will be rewarded. 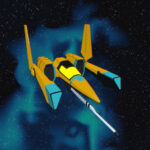 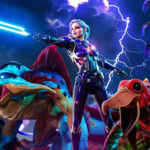 You know her from TV (That 70’s Show, Family Guy), Film (Book of Eli, Black Swan), and have probably even heard of her hit NFT collections (Stoner Cats, The Gimmicks). But did you know that Hollywood star Mila Kunis is a closet World of Warcraft addict? And that her love of WoW has led directly to the creation of a brand new, Web3-powered gaming IP Armored Kingdom? Along with her WoW guild turned production and design team, she is working to build a new fantasy universe on the Near protocol….