As a basement dwelling nerd, I cannot tell you how many hours my best friends and I clocked delighting at the cries of “Special Delivery” “Traitor!” and “You’ll Regret That!” while taking our turn at the keyboard playing Worms 2. Although not a franchise I keep up with to this day, it is one near and dear to my heart. But even as a vocal advocate for crypto-gaming, when I saw the headlines announcing Team17’s Worms NFTs this week, I remarked “dis stupid” to no one in particular.

I was not at all surprised when, 24 hours later, they canceled the loveable Worms’s fledgling foray into the metaverse. As a publisher that serves a core gamer audience, they faced the ire not only of the press and their players, but also their development partners. Going Under dev Aggro Crab publicly said they would no longer work with Team17. Yooka-Laylee dev Playtonic Games and Overcooked! dev Ghost Town Games issued public stances against NFT games. Team17, likely sensing that any profits they may see from the Worms NFTs would never offset the ill will in their player and dev community, canceled the NFT drop.

This is a now familiar pattern among devs who cater to hardcore Gamers like me. As I learned firsthand after bringing the Dragon Age franchise to Facebook canvas with the free-to-play Dragon Age: Legends, Gamers are highly allergic to new business models that impinge on their sacred hobby.

So are the gaming press, who like the game developer community, are largely a subset of hardcore Gamers. Over a decade ago, when F2P was in much the same phase of life as crypto-gaming is now, I used to get dragged in public by my favorite publications in articles like The Horror: If Super Mario Bros. 3 Were Made For Smartphones and then told I was a cancer on the games industry in the comments section. All for talking about F2P design at industry conferences.

We’ve seen it with Ubisoft. We’ve seen it with S.T.A.L.K.E.R 2. We’ve seen it with EA. And now we see it with Team17. Gamers – the type that like me, spend hundreds to thousands of dollars per year on console and PC games – as a tribe completely hate NFTs right now. This will change, but it will take years. Just like how the Gamers that all told me I deserve to be a janitor in hell probably all play Genshin Impact, Hearthstone and Fortnight, the gamers who are hating on Team17’s ill timed journey to the metaverse will eventually come around some years from now. They’ll probably still gripe about it, but they’ll play.

One of the biggest lessons I learned from Dragon Age: Legends is that when a hot, new business model turns game development upside down, you need to cater to the audience showing up for that business model, not try and shove it down the throat of a hostile, Gamer audience. In the early adopter phase, like we are in now with crypto-gaming, Gamers are not the target audience. Don’t chase after them because they will come at you with pitchforks in hand. If you think your AAA or Indie brand with an existing Gamer audience is a good candidate for a crypto-game, put that pitch in the mail and have it delivered to yourself 3 to 5 years from now. Chasing after Gamers with a crypto-game in today’s environment? In the words of my beloved worms upon receiving a shotgun blast to the face, you’ll regret that.

Would you like to receive cypto game ecosystem news and analysis in your inbox once a week? If so, please register your interest in the Crypto Gaming Explained Newsletter from FamousAspect. 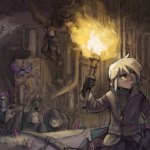 projects feel more like community co-development projects than what we traditionally think of as game development process. Its kickstarter/early access on steroids. A small but passionate and well-heeled community can bootstrap a project that experienced game devs might look at and go “this is pure vapor…