The key to design documents your game engineers won’t hate is doing the right work to start a conversation about building flexible tool sets.

Thinking in tool sets, and not just player experiences, has the added benefit of setting your game up for experimentation, rapid iteration, and live operations. The best game design tool sets will come from designers with a firm handle and appreciation for how games are built, who understand the experiences they want to deliver to players, and are eager to work hand-in-hand with their game engineers. Close collaboration between engineering and design is critical to efficiently building great game experiences for your players.

The Problem With Words

My early design docs were very detailed. Excruciatingly so. But they were not conversations. They were filled to the brim with words an engineer had to sift through to understand the intent and system design they were trying to communicate. As you’ll see in the design document, this format puts a lot of work onto the shoulders of the game engineer. It requires them to decode what’s written and decide what needs to be built.

“There is a critical conversation point between design & engineering that should happen while creating requirements for the MVP. They need to negotiate what takes a lot of engineering time vs what is actually valuable for design to get their hands on. This document does not contain a requirements summary, or prioritization order, which makes me think the designer is not planning on having that conversation:

As you can see from Damon’s response, this document needs a lot of work in order to set the stage for a collaborative and efficient discussion with game engineers.

Nowadays, I focus my energy less on lengthy documents and more on setting context and getting to conversation quickly. I start with a simple napkin sketch and single page explanation to set context. Then I move on to game data design. This spreadsheet is where I force myself to think through my design not using words, but using the data formats that will drive the game experience. This technical design exercise forces me to think about tool sets not experiences. I’m designing flexible lego blocks and making sure they fit together to deliver the player experiences I want.

The goal of good design documentation is not to make all the perfect decisions ahead of time. There are plenty of questionable choices and areas for improvement in the sample configuration design. But the materials provided – the configuration, sample data and user stories – all allow a designer to quickly get to a high quality conversation with a game engineer. It communicates with the game engineer in a format much closer to how they think about building game components. This is the start of a good conversation.

After reviewing the new, more mature game design materials, here’s what Damon had to say:

“Overall, these materials make me feel like a partner who’s time is respected. I anticipate that the initial kick-off/planning meeting will be productive because the design team has already put a lot of thought into what they would like to build and how they would like to work:

In short, this set of materials better sets the stage for discussion, collaboration and iteration between design and engineering. It is a set of design materials focused on teamwork, not task assignment.

This design method – set context, create sample data, explain it with user stories – is much faster to produce than a thoroughly detailed word document. It forces me to design tool sets in a flexible way, and think through my sample data to make sure what I’m asking for will produce the desired result. It also reveals interesting ways that these lego blocks can be used, if properly implemented, to create player experiences that were never designed up front.

As a designer, the key to success is thinking about how to communicate with your game engineer, not how to give them a list of tasks to mindlessly implement.

The design materials provided here are not complete. They are a first draft. They are an attempt to communicate a design with a game engineer concisely, in a method that is familiar to them. By focusing on the needs of the “client”, this method allows a designer to set the stage for fruitful collaboration with their game engineers.

Previous Article Why is Esports Giant 100 Thieves Building Their Own Game Studio? 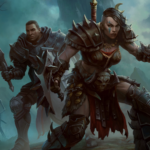 Next Article 6 Months In, Diablo Immortal is Crushing It

If you need a little inspiration in your life, you should look to Phoenix Labs Co-Founder and CEO Jesse Houston. After stints on some of the biggest games in the world at Riot, Bioware and Ubisoft, Jesse set out to build a Forever Company with the Dauntless maker…