Back in March, Battlefield 4 started selling the Ultimate Shortcut Pack, the “ultimate way to level the playing field,” for $50 (now $40). In May, the game began selling bronze, silver and gold Battlepacks, giving players “a shortcut to catch up with their friends on the Battlefield,” at prices ranging from $1 for a single bronze pack to $12 for a set of 5 gold packs. These digital items are just a small part of EA’s digital extra content offerings that generated $794 million in revenue over the past 12 months, according to the most recent quarterly earnings report.

Although my work as a monetization design consultant has primarily been in mobile games, in-game purchase tactics similar to those from the pure F2P realm are undoubtedly becoming a regular part of the premium game business. However, for games like BF4, the desire to generate incremental digital revenue must be measured carefully against game balance and the long-term community happiness at the core of this blockbuster franchise’s annual success. 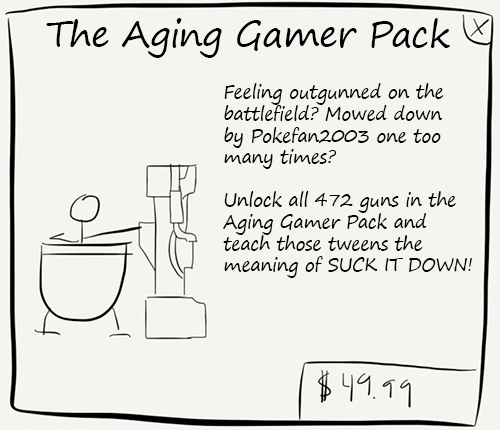 I wanted to see what would happen if I spent $100 on IAP in BF4. Would money buy a meaningful multiplayer advantage, similar to what I would expect in a pure F2P shooter? Can money help overcome my poor skill at multiplayer shooters and the advantage my opponents would have from months of practice and progression?

I purchased two copies of BF4, one for PC and one for Xbox 360. Having never played BF4 before, I would create two separate characters and play 5 hours of multiplayer, skipping any single player content. On the PC, which I played first, I spent $106.34 on in-game content. I upgraded to the Digital Deluxe version, granting me 3 gold Battlepacks. I bought the $40 Ultimate Shortcut Pack and 5 sets of 5 gold Battlepacks for $12 each. As 2 gold Battlepacks had been granted to my account, I opened a total of 30 gold Battlepacks before I started my first match on PC.

I then played for 5 hours, all multiplayer, all Conquest mode. I played the first 4 matches as Recon class using an advanced sniper rifle unlocked with my purchase, then switched to Assault class and a similarly unlocked shotgun. I had realized that as a complete noob with no knowledge of map layouts, I was going to have a terrible time if I stuck to sniping. During these 5 hours of play on the PC, I had 200% XP boosts – acquired in the gold packs – active for the entire play time.

Then I switched to a fresh account on 360. I did not open the 2 free, gold Battlepacks waiting in my account. I played 5 hours of all multiplayer, all Conquest mode, playing Recon with the basic sniper rifle for the first 4 matches then switching to Assault class. My attempts at parity fell down here. On the PC I had chosen to play exclusively with a shotgun I had unlocked in the Ultimate Shortcut pack. But on 360 I could only use the basic assault rifle as all shotguns were locked behind progression.

After 5 hours of play, I compared my stats on the two accounts:

The first thing you will notice when looking at my stat highlights from the two sessions is that I am not very good at Battlefield. 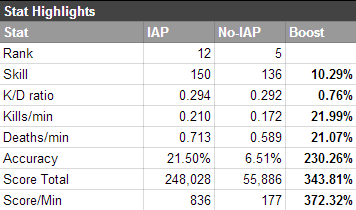 After marveling at my pitiful .294 kill/death ratio, the key finding is that my kills per death were the same on each platform. This is the biggest indicator of the feeling I had during my play session: all that money I spent did not do much. Other than a higher accuracy (thanks to using a shotgun instead of an assault rifle) my $106.34 did not significantly augment or improve my skill during the first 5 hours of play. I may have purchased access to a lot of guns through the Ultimate Shortcut pack, but it looks like these guns were different but not significantly better. And the 62 different accessories I found in my many gold packs were all scopes that made no difference at my skill level. 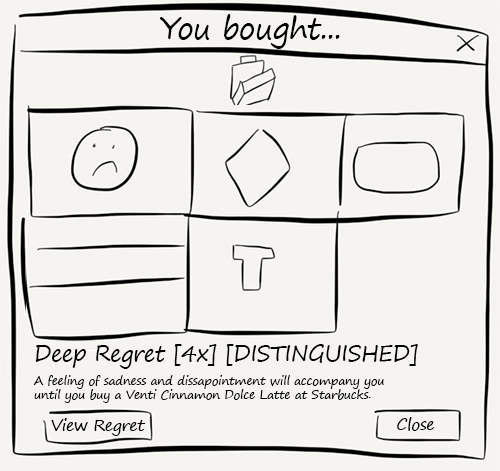 The place where money came into play in a big way was in progression. In 5 hours with boosts, I achieved rank 12 as opposed to rank 5 without, and earned 836 score per minute as opposed to 177. Somehow my 200% xp boosts resulted in an overall 372% increase in score per minute. Digging into the stats, it looks like I earned more Awards while playing with boosts, and thanks to the 200% multiplayer I earned 1,000% more award points accounting for half of my total leveling.

In the gold packs, I gained 150 total items. 37% were purely cosmetic: dog tags, paints, portraits and camos that I as a player do not personally care about. 41% of the items were weapon accessories: all scopes that did not improve my play at all. The only value I purchased in the gold packs were the 33 hour long xp boosts ranging from +25% to +200% of score earned. Over time, it is these boosts which will allow me to level up faster, unlocking the non-scope accessories that can create incremental stat advantages.

This is only one data point, and the data is not entirely clear. For instance, once could assume that I played better in my second 5 hours of play than in my first, but thanks to the money I spent my stats evened out between the two sessions. Or, my performance could be attributed entirely to using the wrong gun for my play style – a shotgun instead of an assault rifle.

To test this theory out, I spent an additional hour on the PC playing with an IAP unlocked assault rifle. My kill to death ratio increased by 130% and my kills per minute increased 91%. Perhaps I was just using the wrong gun the entire time. Or perhaps switching back to the PC illustrates how much I improved during the second 5 hours of play.

Regardless, my $106.34 spend did not magically transform me from a total noob into a decent player. It gave me more options on the battlefield and allowed me to progress faster. But money cannot compensate for lack of skill in Battlefield 4.

Just because I am an advocate of F2P game design does not mean I think Battlefield 4 should include pay-to-win elements. Quite the opposite. The success and longevity of Battlefield as an annual franchise is built on a foundation of a well-balanced game. As Tony Hawk and Guitar Hero have proven, great franchises can fall after too many missteps, and the odor of pay-to-win could easily erode the franchise’s main entries.

However, the purchasing experience itself was lacking. I left the game feeling as though my money had been wasted. As opposed to similar spending experiments in Hearthstone and mobile base-and-battle games, I did not feel like I purchased a lot of value out for $100. Honestly, had I been playing in an organic fashion instead of spending money before my first match, I would not have spent more than $3 on a single Battlepack before deciding they were a waste of money.

Further, I believe that a small number of improvements to the IAP system in Battlefield 4 can transform how I felt about my purchasing experience. In my next article, I cover UI/UX and mechanic changes that would have made spending money inside Battlefield 4 more compelling.

I presented this latest version of my game monetization lecture – Game Design is Business Design – at the 2013 Game Developer’s Conference as part of the Free to Play Design and Business Summit. In the talk, I mention some tools and templates in the lecture that you can find at the following links: Monetization Philosophy (template) Feature Brief (template) Game Treatment (template) Business Model Canvas (template)

Over the past year and a half as a monetization design consultant, one of my core tenets is to make purchasing present. Perhaps the biggest missteps I see in games with IAP is that the developer appears like they are doing everything possible to obscure the fact that a player can spend money within the game. When I get in front of audiences at GDC and other events, I coach that IAP are like banner ads: one must […]

Maturity and immaturity in League of Legends

This article originally appeared on GamesIndustry.biz.  I’m 28 minutes into my 4th ever match of League of Legends when it happens. Another player lets me know that I “is noob” and “suck ballz.” Post game, the player antagonizes the chat room saying we are “so fricken bad” and the “worst team ever”. That’s when TwoBigButts comes to our defense, letting the abusive player know they were not so great either and that they should go […]