When it comes to free-to-play, few games are held up as paragons of virtue as frequently as League of Legends. When writing about my practice as a monetziation design consultant, LoL and TF2 are the two games that come up whenever anonymous internet commenters let me know how much they hate me and all F2P games with these two exceptions. LoL, and by extension Riot, is a smash success on every conceivable metric: from daily user engagement to workplace happiness of employees to valuation at time of successful exit, Riot has crushed it.

As part of a forthcoming article I’m writing on LoL, I decided to take a good, hard look at its first time user experience (ftue). When working in F2P, the ftue is simultaneously one of the most important places for a developer to focus his effort and one of the most underserved parts of a game.

Based on my experience in game development, the forces that result in an underdeveloped ftue (in both paid and free games) are natural and somewhat inevitable. Implementation comes near the end of development, frequently during a crunch period in the lead up to launch. Tutorials generally involve a lot of one-time use code or script to guide the user throughout the game. Outside of the test team, game team members are unlikely to revisit the ftue regularly or if they do, overlook it as a series of rote steps instead of examining it with intention.

On the business side, F2P can be viewed as a numbers game that is about volume, conversion rates and optimization. F2P can also be viewed as a relationship where it is the developer’s goal to provide as much delight to the player over as long a time period as possible. I believe that both schemas are valid and necessary to successful F2P game design.

Viewed from both frames, having the best ftue possible is imperative to running a successful business. From a numbers perspective, many of the most effective improvements a developer can make to his game are at the top of the funnel. Optimizations to ftue will affect the largest pool of users and can have the largest effect on profitability until the game has crossed certain retention benchmarks. A frequent course correction I make after discussing metrics with a developer is to force him to look at and improve the ftue instead of making his live game more feature rich for a miniscule pool of late game users.

From a relationship perspective, the ftue is the developer’s first impression. Just like in the world of human relationships, the effects of making a positive first impression cannot be overstated. A hallmark of the F2P model is a low barrier to entry. This force which makes it easy and risk free for the player to install a developer’s game makes it just as easy for him to abandon the game for another within the first five minutes of interaction. Losing players is an inevitable part of F2P game operations, but making a strong, positive first impression goes a long way in helping a developer engage his players. 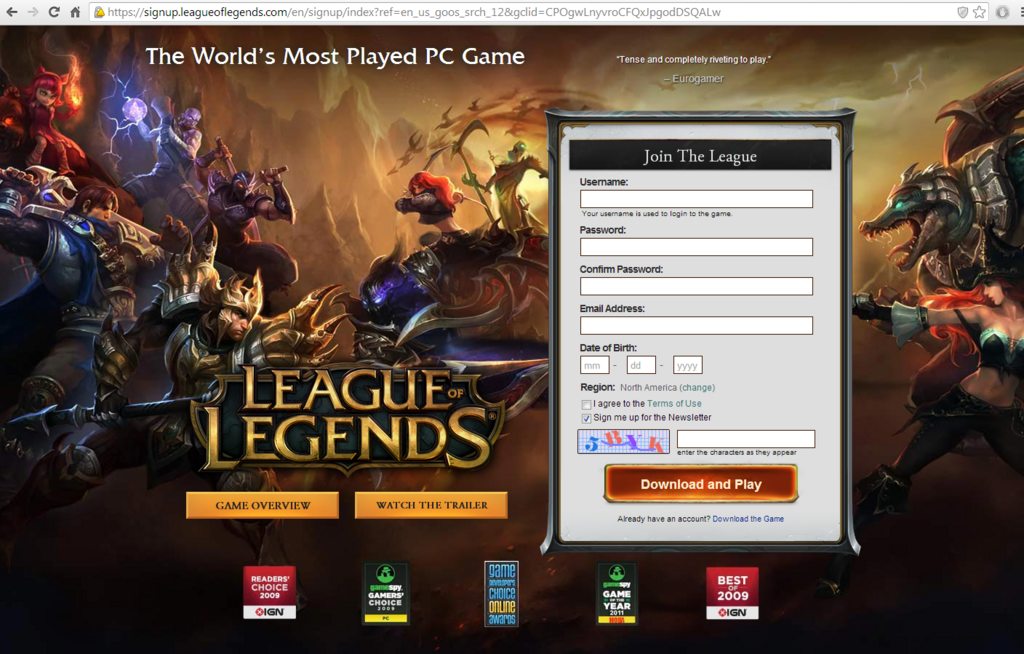 Which brings us back to League of Legends. Let us assume the player has been surfing the web when he see an advertisement for LoL. After months of thinking, “I really ought to give this game a try,” the player clicks the ad and is directed to signup.leagueoflegends.com. We can assume that over the years of LoL’s live development, this page has been a/b tested to death by the marketing team at Riot and they feel that they have optimized this flow to the best of their abilities. Sign up is step 1 of the funnel.

Next the player must download and install the game. Downloading the installer is step 2 and running it is step 3. We can assume that some percentage of players download but never run the installer, and that this loss is inevitable. Little can be done to improve this metric beyond sending the player an email after X days that he has registered his Summoner name and failed to sign into the game for the first time. 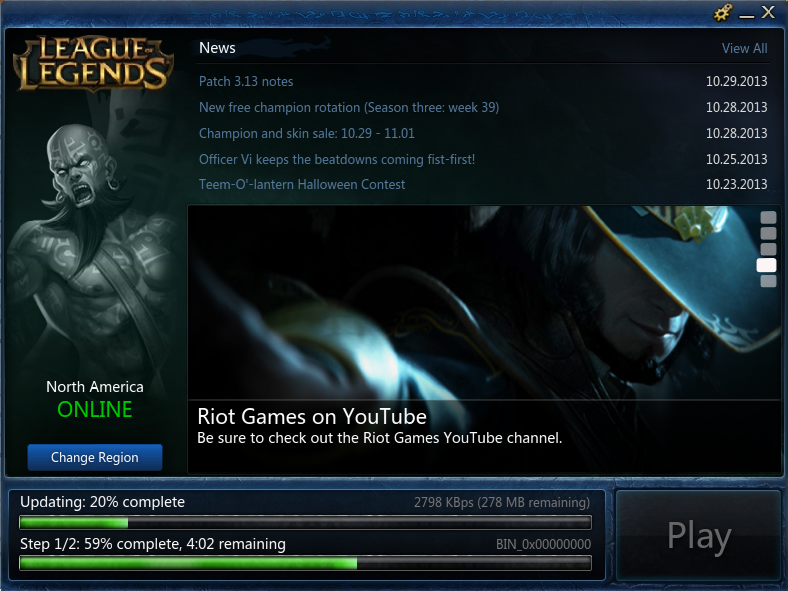 Step 4 is playing the game. In between, the player must use this launcher to download and install the game files. For the sake of simplification, we will end our funnel with conversion to paying user as step 5, ignoring all events between playing the game the first time and making a purchase.

Anecdotally, when I went to install LoL last night and was hit with this installer, I left it open and surfed the web for a few minutes. Then I pulled out my Vita and tried to beat the hospital level of Hotline Miami for at least 20 minutes before it was clear I still had at least 30 minutes of downloading remaining. I moved on to other activities, eventually went to bed, and in the morning closed the installer and went about my work.

It is reasonable to expect that some portion of players who download LoL and install it never actually hit the play button. My assumption based purely on examining this funnel is that the new user loss at this step is meaningful. Look at that launcher screen through the eyes of a player who has never played League of Legends (or any MOBA) and has zero emotional investment in the game. Unlike the signup page which is custom tailored for the new player, this screen is rife with confusing information he has little to no context to interpret beyond experience with other games. The first impression LoL makes in its relationship with the player is “if you don’t already know what you are looking at, you don’t belong here.”

I have no idea what LoL’s real metrics look like. To illustrate the imperative nature of optimizing the top of the funnel, I am going to make up a bunch of plausible metrics as a thought experiment. The numbers themselves are not meaningful as much as the message: as a F2P developer, it pays to optimize the ftue.

For the sake of the thought experiment, let us imagine that the LoL pays an average of $2.85 in user acquisition costs per new registration. What effect can improving the game launcher for first time players have on the ROI of a user acquisition campaign? 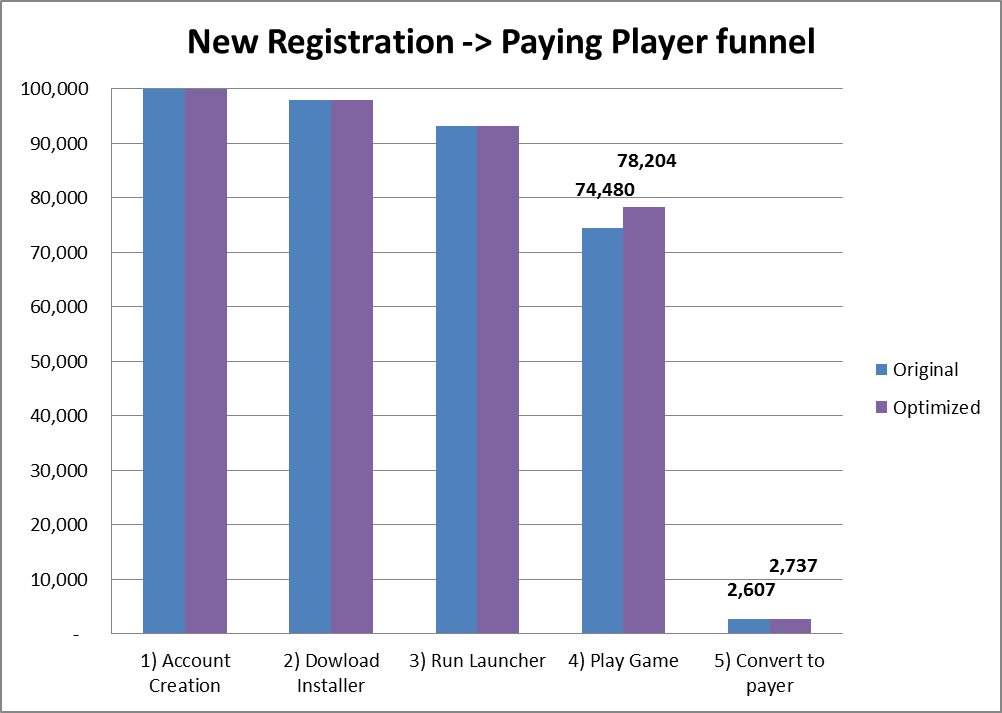 Given these original values, a team within Riot works to improve the launcher, lowering the percentage of players who open the game from 20% to 16% (a 20% reduction in player loss between steps 3 and 4. What are the effects on a paid user acquisition campaign to install 100,000 Summoners? 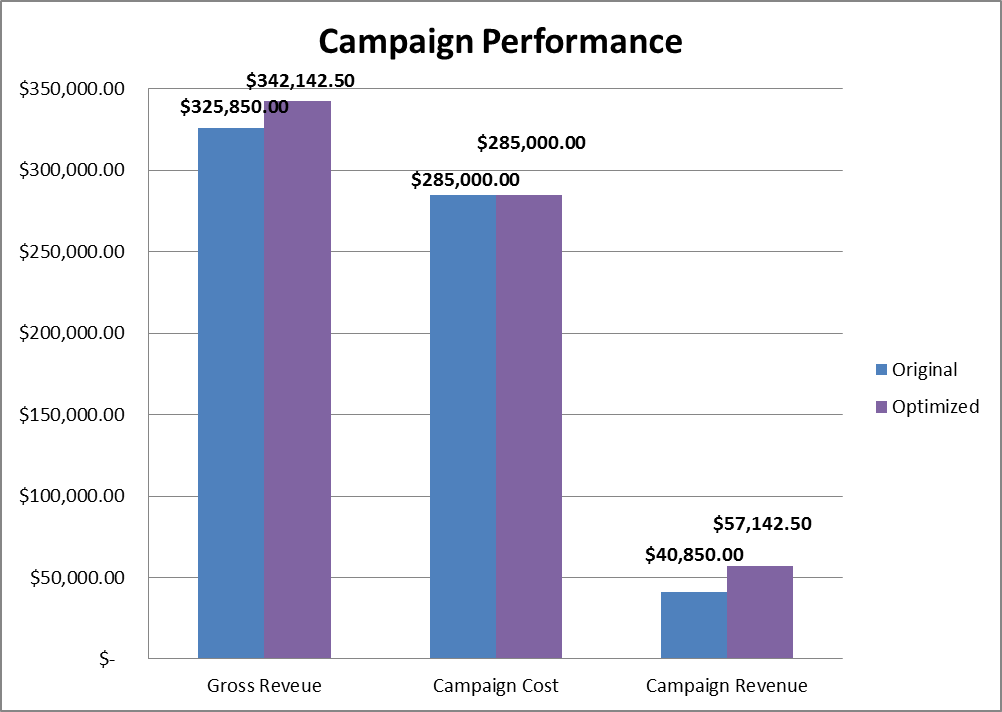 If all other metrics hold constant, the optimized funnel will result in an additional 130 paying players from the 100,000 new Summoners. Campaign revenue will increase from ~$41k to ~$57k. The campaign’s return on investment will increase from 14.33% to just over 20% (a nearly 40% increase in effectiveness). $16k in additional revenue may not sound earth shattering, but now let us assume this played out on the scale of a $10 million user acquisition budget instead of about $300k. This single optimization at the top of the funnel would produce over $500k in additional revenue. 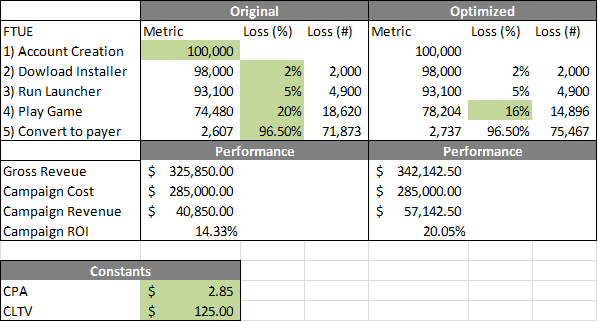 Here are my numbers for review in case I made any errors. Olive green cells are inputs.

As I said, these numbers are purely hypothetical. Only the team within Riot knows what the funnel really looks like and how much revenue could or could not be made by optimizing the launcher. Only someone within Riot could evaluate the potential upside of running experiments on the launcher to try and optimize the number of new accounts that end up playing the game. Once this figure was calculated (let us assume it is roughly $500k annually), the team could determine if it makes financial sense to allocate manpower to creating a version of the launcher that detects if this is your first ever log in and serves you specialized content – such as a series of videos on how to play, or interactive flash content that teaches you the basic interactions of the game – with the purpose of boosting retention metrics at the top of the funnel.

The larger point here is that on a F2P game, it is imperative that the developer make the best possible first impression with his player. Only by examining the performance of each step of the first time user experience can a developer make sure he is laying the groundwork for a successful, long term relationship with the player.