The fact that NetherRealm’s free-to-play Arkham Origins is currently enjoying a top 5 position in the US free charts on both iPhone and iPad is not a surprise. What is surprising is that relative to the incredibly strong performance of the studio’s first free-to-play outing, Injustice: Gods Among Us, the Caped Crusader appears to be significantly underperforming. 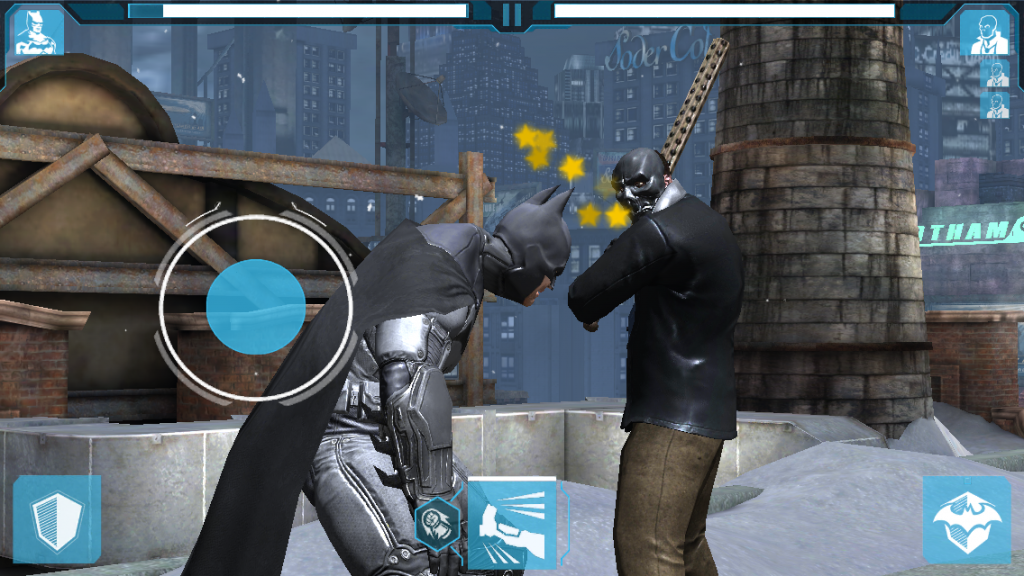 In a vacuum, Arkham Origins is doing well. Personally, I would be very happy to have a game averaging just below top 100 grossing in the US on both iPhone (106) and iPad (109) over the past 7 days. But throw in the Batman license, the awareness created by a huge PR and marketing campaign for the console game, the unlockable tie-in items and the 18 person strong core mobile team at NetherRealms credited in the game and I expect that Warner Bros. is scratching their head as to why Origins is falling short of Injustice’s performance, both in a days-from-launch comparison and last 7-days comparison.

Judging on gameplay and IP alone, the discrepancy in top grossing chart position between these two similar games is befuddling. As a lifelong fighting game and comic fan, the Injustice mobile game did not grab me. Despite the high quality graphics, the gameplay felt incredibly shallow with each character controlling exactly the same as the last. When I spent a few hours grinding to purchase the Bronze card pack, and realized that adding Deathstroke to my roster would not change the experience in a meaningful way, I put the game down. However, as I am fond of saying when lecturing on free-to-play design, fun is a subjective experience. Injustice may not be the right mobile game for me, but clearly from the healthy chart positions and player review scores there is an appreciable audience for the game.

A variation on a theme, Origins has refined the formula put forward in Injustice. Batman has a variety of stances that affect how he fights and the special moves he can unleash. The combo system is improved, fights are shorter and more appropriate for short mobile play sessions, the game’s mechanics are more clearly explained in a way where I actually understood all the buffs and debuffs at work, there are boss fights that change up the pace of battle and the energy mechanic cut me off when I was eager for more action, putting me in state where I was looked forward to coming back a few hours later. 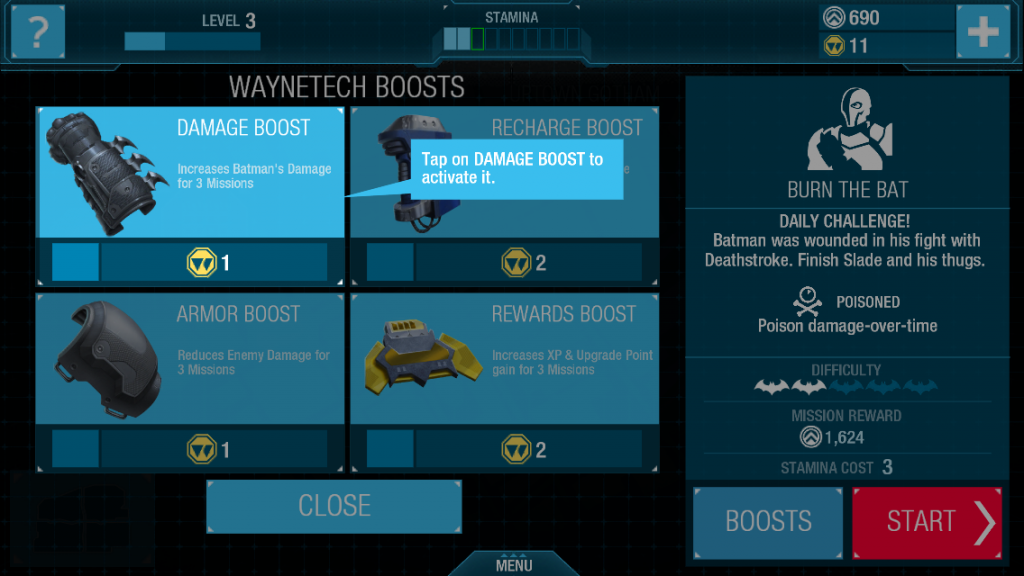 Outside of the gameplay, NetherRealm has made clear improvements as well. The game does a better job of teaching me the interface, teaching me how to spend my currency as well as how to upgrade my character. But it is when I took a look at the premium items on offer that, as a free-to-play consultant, it is clear why Origins is currently underperforming relative to Injustice. 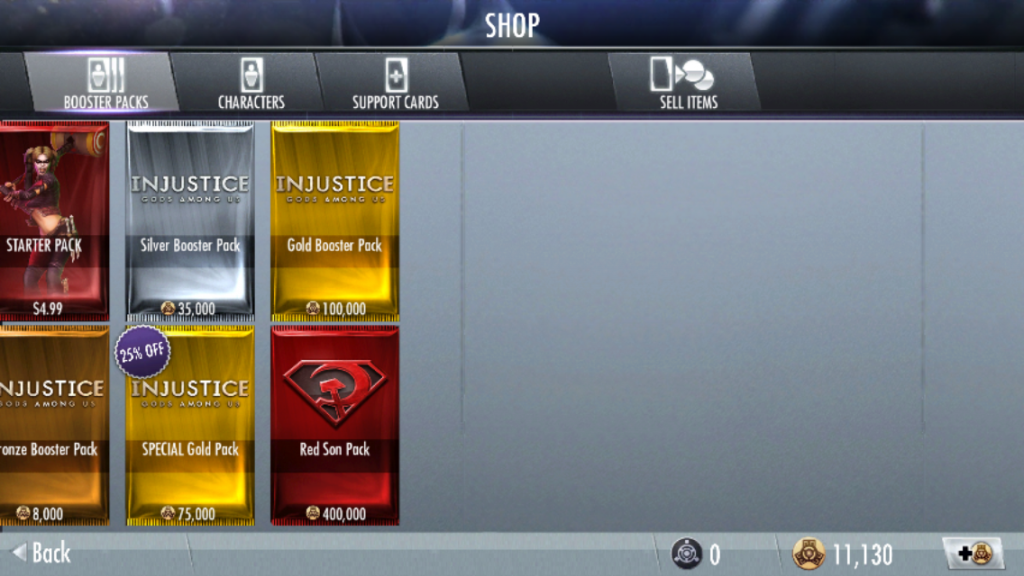 10 minutes into Injustice, if a player visits the store he can spend premium currency on packages ranging from 8,000 to 400,000 coins, or $0.53 to $26.67 when purchasing $100 currency package. If the player does not want a random card pack, but instead to directly purchase a favorite character, the prices are in a similar range. 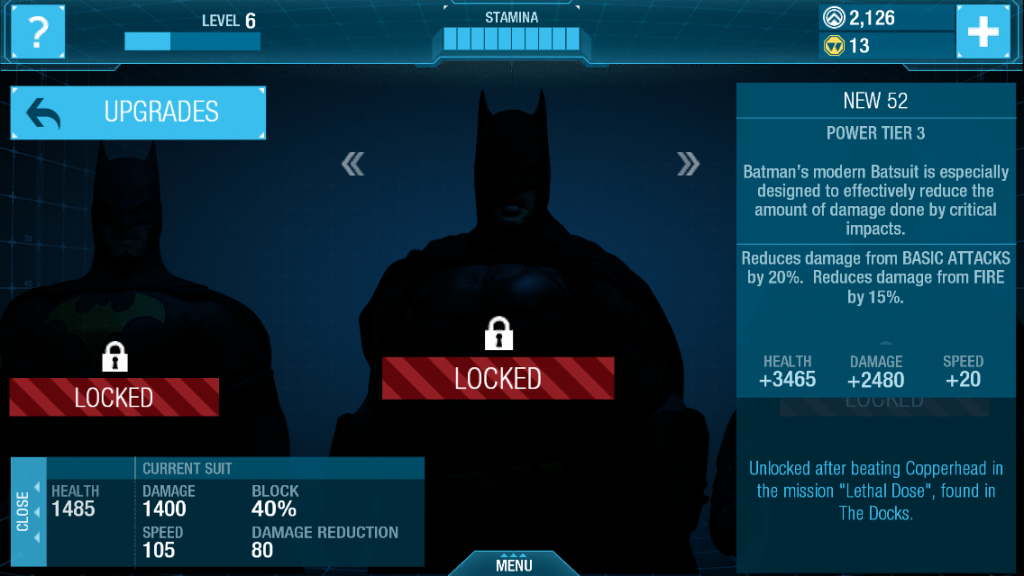 By comparison, if the player visits the Batsuit interface – Origins’ closest equivalent to the card shop in Injustice – 10 minutes into play, he can purchase the Long Halloween suit for 18,000 coins ($1.64 assuming I buy currency at the $100 level) but the rest of the suits are locked. There are other noticeable missteps in the monetization model (pre-battle consumable purchases are hidden behind a sub menu) as well as improvements (the player can spend premium currency to continue a lost battle). But more than anything, I believe that locking the player’s ability to spend currency behind game progressions is the root cause of Origins’ lackluster monetization relative to Injustice. The result is that Origins’ monetization strategy largely devolves to selling energy in place of Injustice’s focus on card packs. 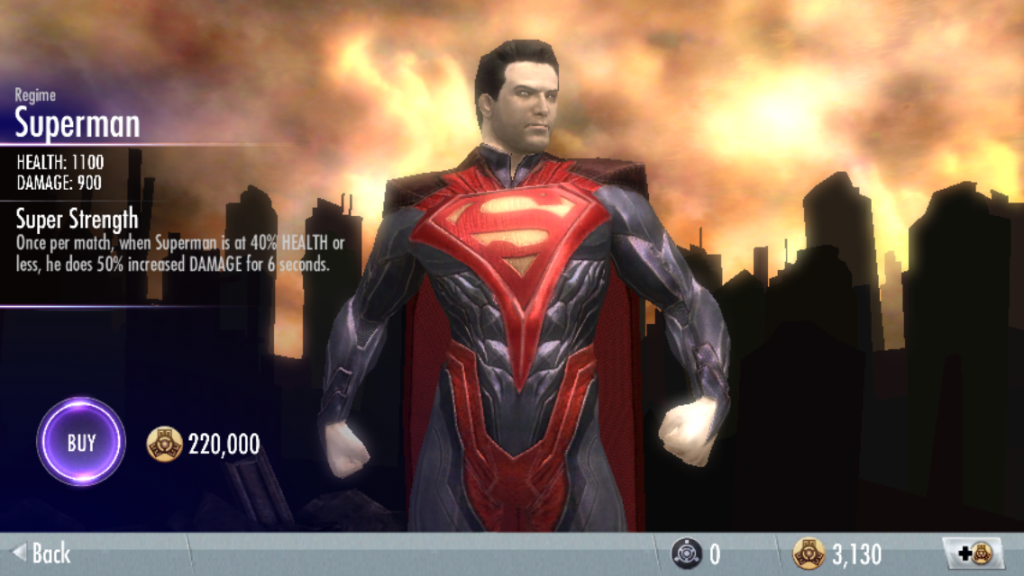 If a player is willing to spend $14.66 worth of in-game currency to unlock Regime Superman, he likely falls into the category of money-rich, time-poor. The player likes battling in Injustice, he likes to win and he is willing to pay a big premium to play as a beloved character and breeze through the game. In this scenario, the same player is likely unwilling to spend hours grinding for the privilege to then spend money on a Batman Beyond suit for the Dark Knight.

Free-to-play development and operations is a marathon, not a sprint. Batman is a perennial brand and Arkham Origins is likely to enjoy a position in the top 100 free downloads charts for months. A few simple changes to the game mechanics, or additional features like gadget packs and multiplayer, cooperative events and the game can easily overcome Injustice in the top grossing charts. But based on the credits section of the two games, I hypothesize these sorts of changes are unlikely to come to Origins.

All 13 members of Injustice’s core mobile team are credited on Origins, along with 5 new, core team members. Given the short timeframe between the two games, I would guess that after a few weeks or months of live development on Injustice, the full team moved over to Origins in order to hit the hard date that fit into the overall marketing plan for the core, console product. I assume that on a whiteboard somewhere within Warner Bros. the next hard marketing date for the NetherRealms mobile team is already scheduled. Perhaps they are already hard at work on the mobile tie-in for the next Mortal Kombat, or a game to accompany the Batman/Superman movie, or a Lord of the Rings brawler. 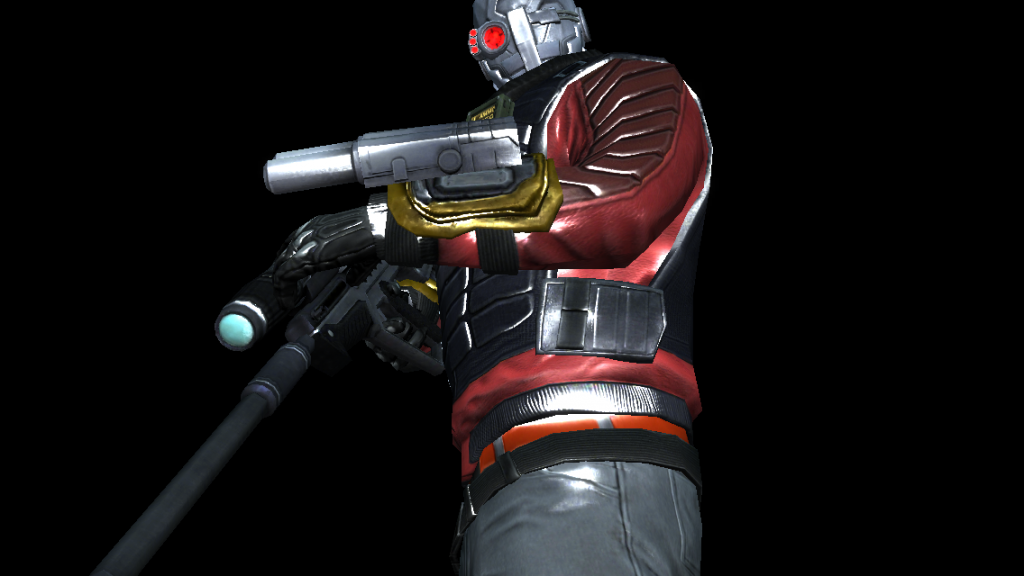 When I compare Arkham Origins to Gods Among Us, my sense as a player and a game designer is that NetherRealms has made an undoubtedly better game, but a worse free-to-play product. They have made fundamental changes that will earn them brownie points with gamer wary of free-to-play, but have a negative impact on P&L. Even more damaging is the effect of diverting resources from a top grossing, live game to build a new product. I know from firsthand experience how difficult hiring talented team members can be in a competitive space like mobile game development. But by shifting resources instead of growing the overall mobile team to support multiple games (which I assume is the case solely based on the credits) Warner Bros. has not only delivered a lower performing product, they have missed months’ worth of opportunity to add new features to Injustice that would grow player base and profitability. However, with the ongoing appeal of Batman and DC Comics characters in general, Warner. Bros and NetherRealms have plenty of time to enhance both products while building new free-to-play games based on a strong stable of brands.

Note: all data courtesy of App Annie and was compiled on Oct 23rd. The first day stats for both Batman: Arkham Origins and Injustice: Gods Among us were thrown out for purposes of this analysis. According to App Annie, both games started listed as N/A and had their proper names switched on at some point in the first day after appearing on the store.

Slides and audio from New approaches to free-to-play game design, my game monetization talk presented at GDC Next ’14 in Los Angeles. Here is the talk description: Too often, a game team chooses the free-to-play business model without truly considering the design of monetization elements early in the project. Only when it is too late into the development cycle do they learn that there is not a clear or compelling reason for players to spend money within […]

Back in March, Battlefield 4 started selling the Ultimate Shortcut Pack, the “ultimate way to level the playing field,” for $50 (now $40). In May, the game began selling bronze, silver and gold Battlepacks, giving players “a shortcut to catch up with their friends on the Battlefield,” at prices ranging from $1 for a single bronze pack to $12 for a set of 5 gold packs. These digital items are just a small part of […]