If I were to open up Bejeweled Blitz and play 10 matches of the game, I would see the Add Coins button 20 times within that session. It is not blocking my progress or making a nuisance of itself. But simply by playing the game and following the path of least resistance, I see the ability to spend money regularly. Purchasing is present.

This is in stark contrast to one of my favorite mobile games, Ascension, a game that vexes more than any other when it comes to IAP. I love Ascension. For literally two years I have played at least three matches of Ascension daily. It is my solitaire. I love it when they release new card packs, and would gladly pay $5 or more for a new promo pack of 6 new cards right now, let alone a full game expansion like Immortal Heroes that drastically changes the game with new rules and 36 new, unique cards.

I do not follow Ascension on Facebook or Twitter. I do not subscribe to an email newsletter. Expansion pack releases do not make headlines on the game sites I follow regularly. The only method I have of hearing news of new IAP (which I desperately want as a core player) is through the app itself. An app I interact with multiple times daily. I have money. I want to give it to the developers. But they make it exceptionally hard. 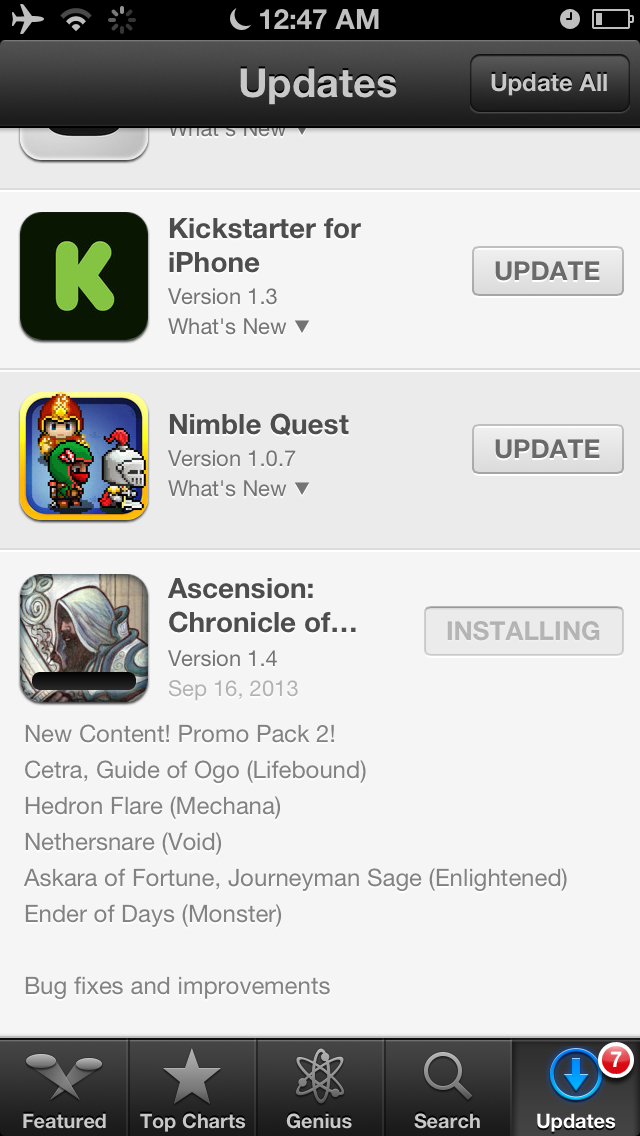 The only way I am able to learn that I can give the developers my money is through App Store updates. Specifically I have to know that, as shown above, Ascension puts the announcement of new IAP in the patch notes. I update my apps maybe once every two or three weeks (and expect that is an above average frequency across all iOS users). Sometimes it is days or weeks after an expansion has launched before I make the 3 clicks it takes for me to see this information.

Once I learn of new content, I must continue to jump through hoops in order to purchase my pack. I have to update the app and open it. Then I get to the Main Menu, which is no help. 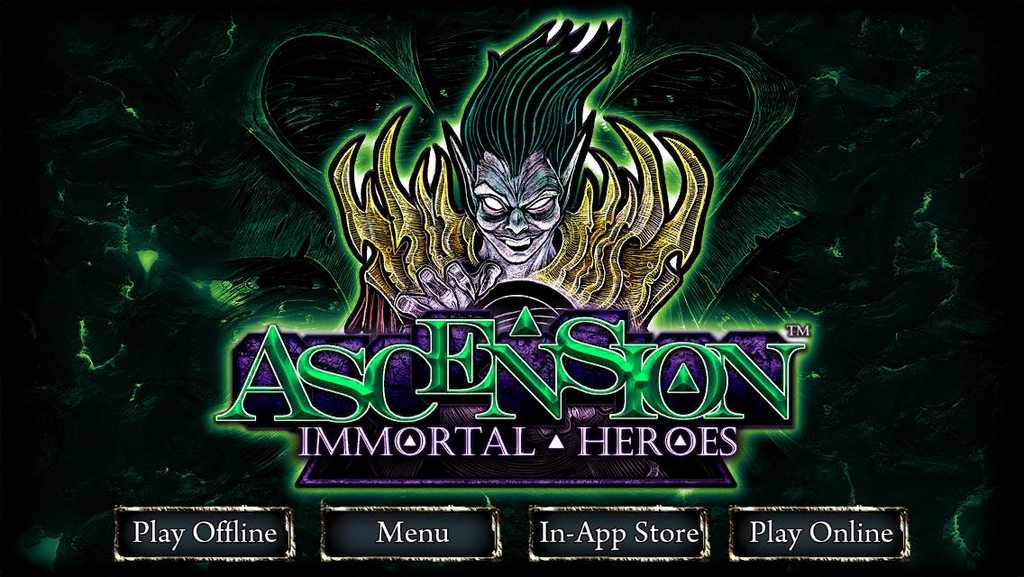 I have to remember that a new purchase is available and navigate to the in game store. 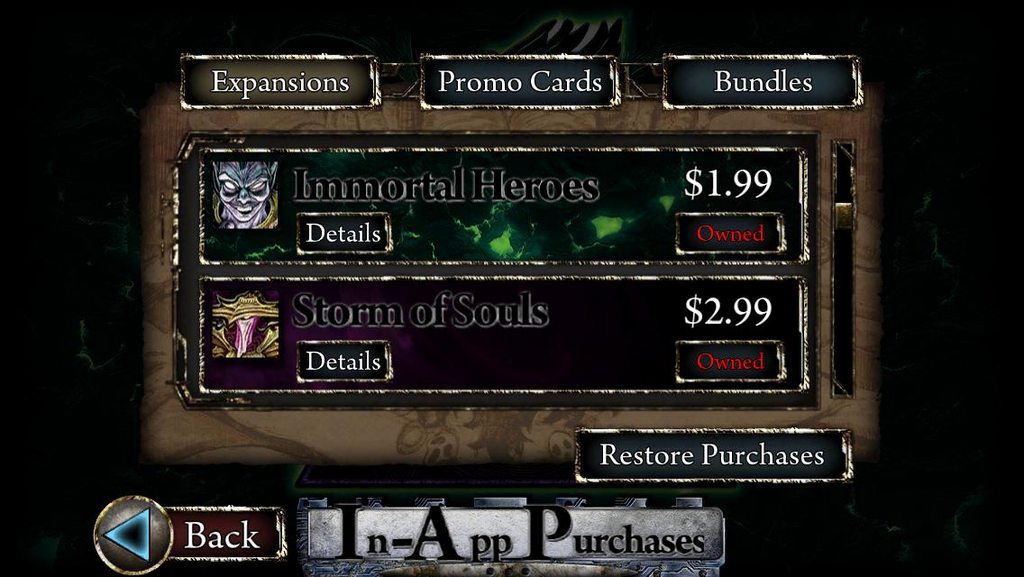 In the case of the days old Promo Pack 2, I have to remember that the new content was a promo pack and navigate to the appropriate tab. 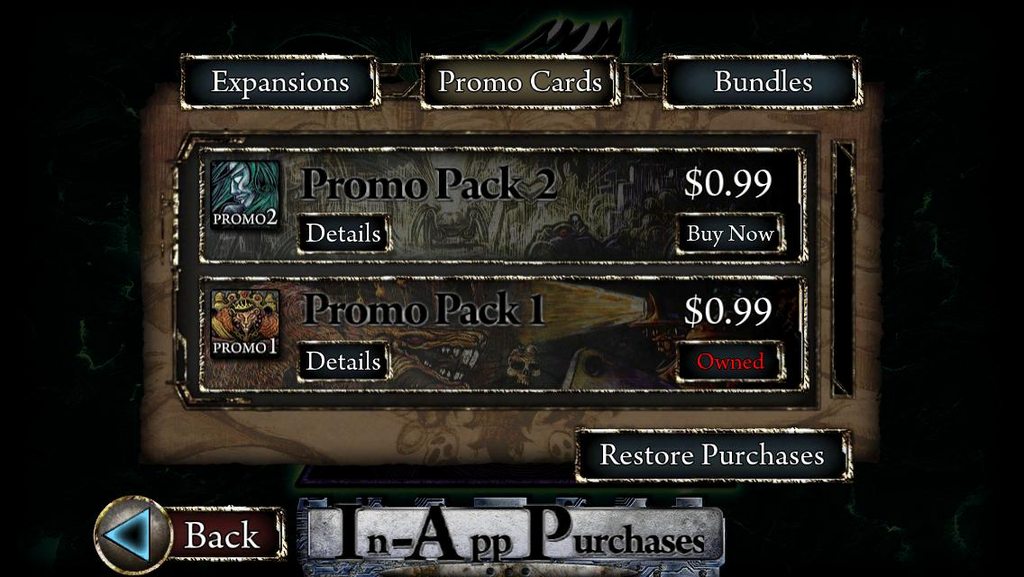 Before I am finally able to give them the money I desperately want to alleviate myself of.

1 account confirmation, 9 clicks and an obscure user flow I am more likely than not to ignore later, and I have finally completed a purchase that I am 100% primed to make.

I believe that Ascension communicates these new purchases via notifications, but I (like many iOS users) am annoyed by frequent notification spam and turn it off for almost all apps. For my favorite iOS game, one I have played almost every day for literally two years, one I am burning to give more money to, purchasing could not possibly be obscure.

Making purchasing present would be trivial. I see the Main Menu every time I open the app. Why not implement an in-game notification badge on the In-App Store button when new purchases are available? Why not integrate a spot for a banner add into the Main Menu to alert me of new features, content and updates? Why not integrate an in-game interstitial that notifies me of new content between matches after every 5th or 10th game and turns off after I’ve seen it 10 times?

How many Ascension players have no idea that 3 expansion packs and 2 promo packs are available for purchase because purchasing is not present?

Please Stoneblade/Playdek. I have money. I want to give it to you. Make it easier for me to do so.

This article originally appeared on Kotaku Ten hours into Assassin’s Creed Unity, I’m having difficulty finishing up memory sequence 6. That’s just about the middle chapter of the game. I think my character is too weak. His armor isn’t strong enough. Neither are his weapons. I could stop working on this memory, instead grinding on side missions and locating chests until I have enough Livres to buy more powerful gear. Instead, I open up the […]